Another two Korean fried chicken (KFC) places opens in town area (Tanjong Pagar and Orchard). Out of which, TWINS is a new start-up whereas Choo Choo Chicken at Cineleisure 3F is the second outlet apart from the first outlet at 33 Bali Lane. Being a sucker for Korean cuisine (all thanks to Running Man and hours of K-drama), cravings for KFC kicks in and I find myself visiting these 2 places within a week and below is my review:

Rose Chicken only at the NEW Choo Choo outlet at Cineleisure 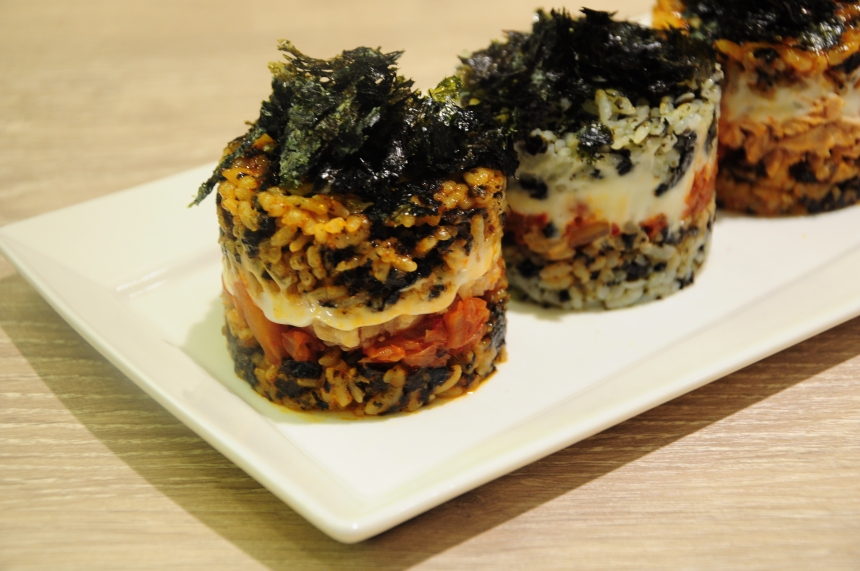 The most worth-your-money deal here got to be the lunch set where you get seaweed rice + choice of Korean fried chicken ($8.90) and top up further more for rice burger. Speaking about rice burger, I love it to bits, it is basically tuna/spam/vegetable with mayonnaise, sour crunchy kimchi sandwiched between two rice patties. Imagine my excitement to learn that they offer 3 mini rice (spicy/normal) burgers at $10 only at the Cineleisure outlet. This new idea works for me as I could order one of tuna, spam and beef bulgogi and share around!

Now, to their chickens, in general: The double fried chicken was crispy and the meat within retained its juices and tenderness even after some photo-taking.

The crispy chicken has a well – seasoned batter that is crisp but the meat is a little dry. =/

Soy – light salty with a tinge of sweetness

Garlic – tasted more of sweet than garlicky, lacking a little in the strong garlic punch 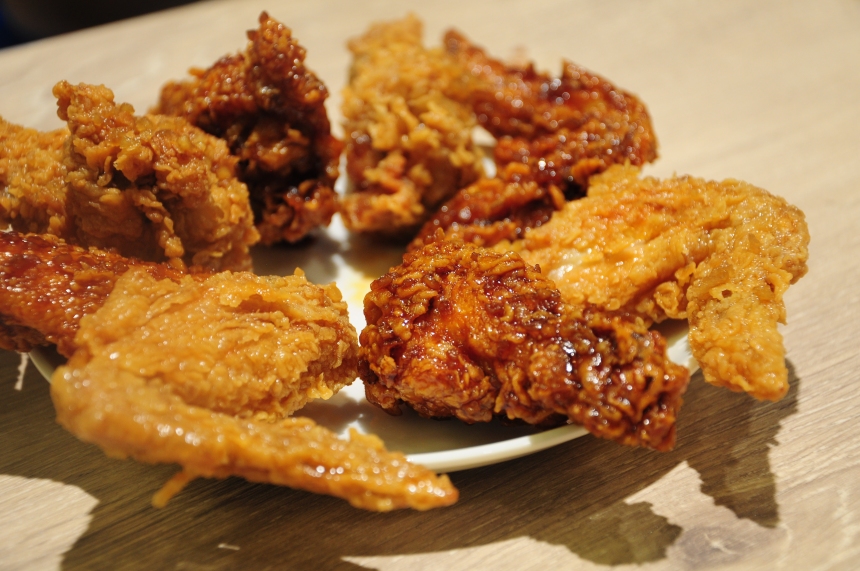 Perhaps given its close proximity to Cathay Cinema, cup chickens (bite – sized chicken tender chicken chunks) are sold here too and makes it a good snack to sneak in while enjoying the movie.

These two dishes are exclusive only to the outlet at Cineleisure and I knew I had to try it:

Choo Pa Chi (Spring Onion Chicken with sweet and sour sauce) – A rather refreshing dish with crispy garlic fried chicken tenders. If you love onion, go for this!

Rose Chicken (Rose cream sauce which tasted tomato-ish) – comes in a bread bowl. The sauce was a tad thick when we first tried it but they have since tweaked the sauce. I prefer the Choo Pa Chi to Rose Chicken among these two new dishes offered.

The Bali Lane outlet is smaller and tends to be crowded with a long waiting list so this is the best chance to try Choo Choo Chicken at this new outlet before this well-kept secret gets leaked out!

{Updated 7th June } There is choo choo chicken discount vouchers sold on Groupon, get some before they get snapped up: http://m.groupon.sg/deals/singapore/choo-choo-chicken-cineleisure-1/720400531

Headed down to TWINS (named TWINS as the chefs are handsome twins) with three other foodie friends for lunch on a weekday as it is rather near my office at Outram and my verdict – I like the Spicy seafood noodle soup and garlic fried chicken wings among the rest that we tried.

Since, it was near noon time when we visited, the mighty sun beams through the airwell and casted a shadow on the walls. It was a rather peculiar sight of shadow-play.

Alright back to the food that we ordered: We ordered a seafood pancake (해물 파전) for sharing, yangnyum (half chicken portion, garlic chicken wing, cheese flavoured chicken set lunch that comes with a bowl of rice and salad and a petite size of twin berries snow bingsu for desserts.

The seafood pajeon with fresh seafood could be crispier but I liked the spicy dipping sauce that comes along. 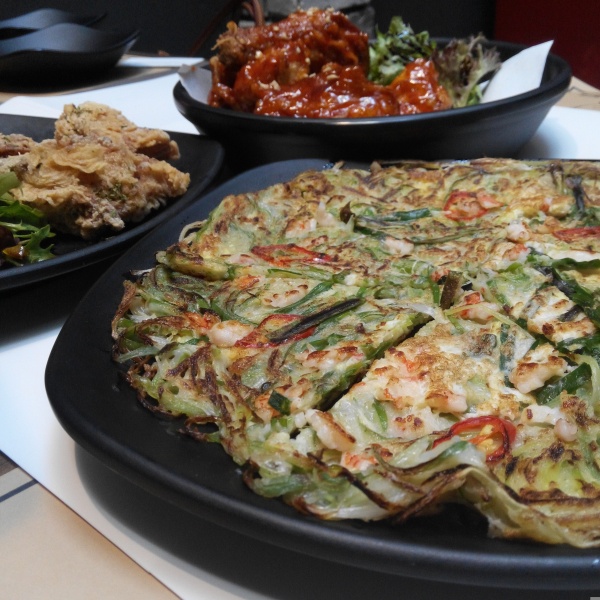 Yangnyum Chicken – sweet Korean sauce sprinkled with sesame seed with slight hint of spiciness. It is more sweet than spicy, which doesn’t work for me though.

Garlic Chicken Wings – flavoured with honey garlic and soy. This strikes a good balance between sweet and saltiness and in no time, I find myself finishing three wings.

Seafood Noodle Soup – this bowl of spicy noodle (udon-like texture) soup was full of flavours from the seafood (crab, prawn and squids) Spiciness level was high for this and I was sweating buckets while enjoying this dish. 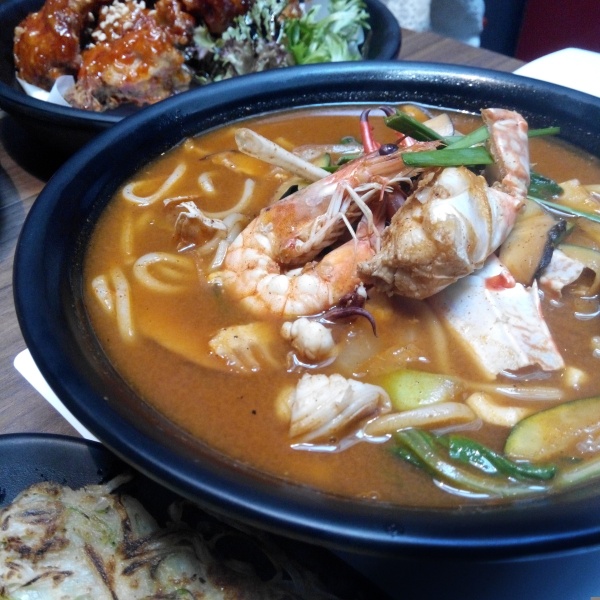 Twin berries snow bingsu – I guess I am expecting too much for something that cost $8. It came in a small bowl with a low peak littered with strawberries and blueberries. Texture of snow was smooth and condensed milk was used here, but I would prefer any of the other Korean desserts snow ice listed here: 5 New Korean Shaved Milk Bingsu instead.

There is a grand opening promotion of Chicken Combo (Half chicken, 10 wings and kimchi rice/fries – $40) and ice cream beer at $10 from 5 to 8pm! Don’t say I bojio ah!

My Verdict: With the opening of these two Korean fried chicken (KFC) joints, it results in a tougher decision in choosing which restaurant to go when the cravings for KFC kicks in. There are just too much KFC as of recent don’t you agree? For me, in Orchard, it would be ChooChoo Chicken for Spicy/Soy/Choo Pa Chi/Rice Burger and Chir Chir for crispy/Nest Snow. What about you?